Software defined network are implemented by us to reshape the designed network, managed and secured for M.Tech projects. We evolve open flow switches/ controllers such as NOX, open daylight and floodlight. It is a new architecture implemented in networking. Hardware switch composed of data plane and control plane components. We proposed various SDN process based on ACM papers. 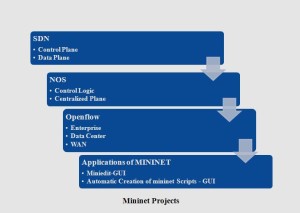 It has responsible to draw network topology and maintain track ability reach and neighbor status.

Data plane composed of forward and routing table. It works faster than controlplane. Two planes are tightly coupled on device.

In this network, we develop new application and change behavior of the device.Control logic is shifted from device to centralized plane which is overcome by SDN. Network operating system also referred as SDN in shifted control logic.

We use openflow value are:

We adopt mininet more than 90+ application as: