Networking Projects For Final Year Students is an interconnection among group of computers and the interconnection are used to share data and  resources between computers. We offer Networking projects for final year students to improve their technical knowledge. We handle networking projects for under graduate B.E students in discipline of CSE, ECE, IT and post graduate students with communication field. Various types of networking concepts are handled and guided by our team. Based on students convenient and requirements, simulation tools are developed for network communication projects.

Currently, we support different types of network and they are described from Springer paper as:

We implement actuator networks which is a new generation of sensor network. It used to control application and designed with distributed system of sensor nodes. Node in network are interconnected by wireless links actuator node transmit gathered data through single hop (or) multi hop communication.

To provide actuator networks, various parameters are considered and they are given as: 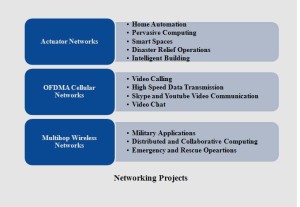 By actuator network implementation various application area are focused they are:

To provide high data coverage of radio and video applications, an enhanced cellular network called orthogonal frequency division multiple accesses are implemented our team. It consist of multihop relay frequency division multiple access. In this network, we use multiple relay stations to transmit data between base station and multiple mobile stations. For data transmission we use frame by frame resource allocation. It composed of downlink (dl) and uplink (ul) sub frames.

Various properties of OFDMA network are supported by us are:

Various application of OFDMA Network is enhanced by our team are:

We implement two types of multihop networks for wireless communications are relay and mesh. Relay networks formed by tree based topologies, where base station act as root. Mesh network are formed by mesh topology provide multiple connections between users.

Various protocols implemented by us for multihop wireless network are:

More than 90+ projects are enhanced by multihop wireless network and implemented by us are: